Into Africa: Into the Bush


It is our first day on Safari in South Africa at Madikwe game reserve, and it's been incredible. The day started before our first official Safari -- our bus took us only as far as a dirt landing strip where we unloaded and split up into three Safari vehicles and a fourth truck to haul all the luggage. 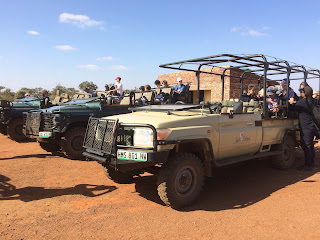 We were originally scheduled to stay at Tau Lodge, but they had a fire last Wednesday (June 14), so there was some scrambling to find alternate accommodation. Fortunately, the different lodges in the park seem to get along pretty well and we were able to get accommodation at Jaci's and we have been pampered by the joint team from both Jaci's and Tau.

Anyway, back to the animals! We had about an hour drive from the airstrip to the lodge. Along the way we saw: a large, oldish male giraffe, who ambled across the road in front of us. 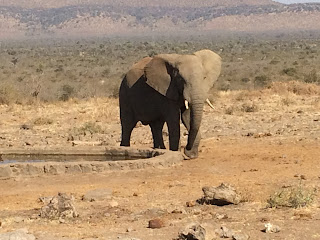 Next up was an elephant and lots and lots of impala (pictures later in the stay). 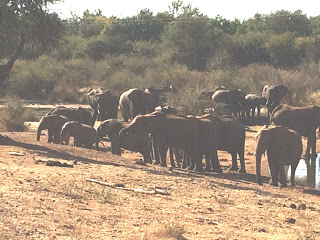 Then we approached Jaci's watering hole and came upon dozens of elephants -- large, small, medium-sized -- it was unbelievably amazing.

We arrived at the lodge with barely enough time to get a brief orientation, eat lunch, stop by our rooms, and head out on our first real safari drive. I was staying in a place called the Tree Lodge, which consists of a central lodge and then long elevated wooden walkways to individual bungalows. Each bungalow has it's own building with a deck and outdoor shower. The rooms were enormous and included a HUGE bathtub.

The safari drives are three hours in total: about an hour and a half, followed by a stop and snack, followed by a final hour. I don't know if this is true at all lodges, but Jaci's does not believe in letting you go hungry -- I feel a bit like a hobbit. Before our 6:30 AM game drive, we will be given first breakfast (coffee, tea, muffins, toast, oatmeal). We will then have a snack in the middle of the safari ride. We return to the lodge for second breakfast (eggs, bacon, fruit, sausage, yogurt, etc.) Most people then have to tough it out until high tea at 3:00, but we are special -- we have a post-breakfast activity (tomorrow we're learning about elephant conservation) followed by a full lunch. We then repeat the safari ride and snack combination in the afternoon/evening and return for a full dinner. And while I've been pretty good so far at sticking to meat and vegetables, the folks here have baked me homemade gluten free bread and made me gluten free pasta. I kind of feel like I have to eat it. I was all ready to skip dessert this evening and they brought me a special dessert (which I managed to pawn off on a friend). 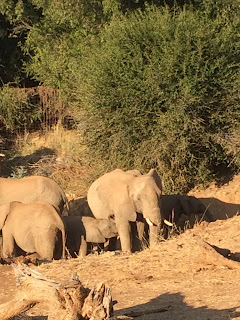 Then was saw lots and lots more impala, whose backsides seem to have M's on them. The local joke is that it stand for "McDonald's". Impala are the most plentiful antelope, and everyone eats them! Personally, I think the M stands for "mmmmmm". 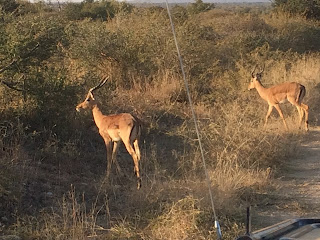 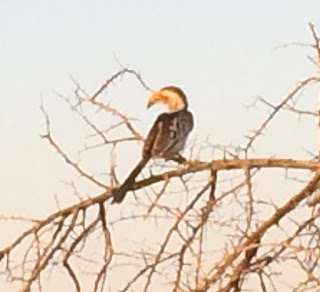 We saw some gorgeous birds, including the lilac breasted roller who has spectaular bright blue wings (but is relatively small and difficult to photograph) and the yellow bill hornbill (aka Zazu bird).

By then it was almost sunset and it was snack time. After snack, we started the nighttime adventure -- the driver scans with a spotlight while driving. We saw more elephants, some zebra, a (small) warthog, a few bunnies, more impala. One of our cars (not ours) also saw a water buffalo! By this time it was also quite cold, but fortunately we'd been told to layer up and they provided us blankets in the open-air safari vehicles. And so ends day 1 -- can't wait to see what tomorrow holds.
Sunday Safari
Monday Safari
Tuesday Safari
Leaving on Wednesday
Back to Main Page
Posted by Margo at 4:38 AM