It is 4:57 on Marathon Monday, and by the time you read this, I'm sure you all know what transpired today in Boston at the finish line of the Boston Marathon. I am grateful to be safely home and am at my keyboard waiting for all my students to check in. As Harvard has classes today, I am optimistic that my students were all in Cambridge, safely out of harm's way. Even so, I'll be happier when I see their messages. If only everyone else would be so lucky.

I figured that blogging might be a distraction from the day's events, but nonetheless, my suspicion is that this will be short and perhaps scattered.

It was a rough week to be a CS161 student. The virtual memory assignment was due on Friday and it is a particularly devilish assignment -- the number of lines of code to write is not huge, but getting the synchronization correct is just downright hard. This sets the students up for a lot of late night debugging, perhaps an all-nighter, and then perhaps a couple of late days. This has all played out reliably over the past many years.

So, this week's status has much less to do with flipping and much more to do with CS161, virtual memory, and why anyone would put themselves through this. For your reading pleasure, I bring to you a Facebook discussion that took place after I posted a note about how guilty I felt coming in at 8:00 AM and finding my students (surprisingly happily) working away, having been up all night. Let me just say that I never looked that happy after an all-nighter.

My original post: There is nothing quite so guilt-inducing as walking into your office at 8:00 am and seeing your students sitting in the lounge working on your problem set after having been working on it all night. Oh wait -- there is -- seeing multiple groups later that day around 4:00 PM -- all of whom have been up all night and are still working. Many of them now have operating systems that mostly support virtual memory, though!

In the following, I have converted names to initials, to provide some shred of anonymity.

And to top it all off -- this week's picture, straight from China: Tao Stein's students at midnight working on their ray tracer. 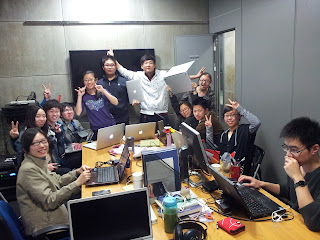