Live from Valenciennes: Italy versus the Netherlands

Have I mentioned lately that we're having a heatwave?  As in record breaking temperatures in Paris and a balmy 92 degrees (32+) here in Valenciennes. And we thought the Paris quarter final was hot -- that was at 9:00 PM.  For some reason whose logic totally escapes me, today's quarterfinals are at 3:00 PM and 6:30 PM instead of the prior 5:30 and 900 PM games. It certainly  wasn't cool at those times, but it was way  better than it was in the mid-afternoon and later in the day you can harbor some fantasy that the sun will go down and you won't be sitting in direct sunlight for 3-4 hours.

Enough whining. Today's seats would have been wonderful on any  other day -- 5 rows back at about the 35; the only problem on  this particular day  is that we had absolutely not the tiniest bit of shade. On top of that, the seats in Stade du Hainaut are A) red patent leather (skin searing), B) separated by metal (skin branding), C) high (nose level). Just traps the heat in ever so much more! 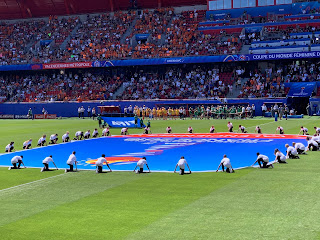 The first quarter of the game saw a rather fiesty Italy looking like it really  was the Cinderella team of the tournament, who would defeat the mighty Netherlands. And even into the second quarter, Italy still looked quite strong and had the better chances. At halftime, it was a tight 0-0 match and those of us broiling in the sun, raced for the shade and breeze inside the stadium.

Unfortunately  for the Italians, the second half was much different. Perhaps it was the heat, perhaps it was exhaustion, but Italy of the second half was not the Italy of the first half. They missed passes they'd been making the first half and essentially collapsed into a defensive posture, which just invited the Dutch onslaught even more. You could see their frustration -- the four yellow cards might give you a hint of that. And then the inevitable -- in the 70th minute, Vivianne Miedema did it -- a glancing header off a gorgeous cross. It was textbook perfect. This seemed to demoralize Italy, who continued stalwart defense against the reinvigorated attackers. And so reinvigorated were they, that in the 80th minute, in an almost identical repeat, Stefanie van der Gragt headed in an equally well-placed ball, the result of yet another foul.

I wouldn't be lying if I said there was some relief in the stadium that we might not have to bake for an additional thirty minutes. After this game, there was no lingering in the stands for me -- it was out as quickly  as possible and into the shade!

We joined the parade of orange heading back from the stadium, with a slight detour to pick up the key for Vaas' airBnb. Following the fans turned out to be a great idea as it deposited us right in the fan zone which boasted an enormous display where they would be showing the Germany/Sweden quarterfinal. Thanks to Vaas' eagle eye, we scored ourselves a table in the shade with reasonable screen visibility. There was a large part of Swedish fans next to us, so we found ourselves cheering for Sweden.

With food, beverage, and shade available, it was a lovely afternoon in Valenciennes (which I have to confess is my least favorite city this trip). The game was also another hard fought quarterfinal battle. Germany are the seasoned Women's World Cup veterans -- the only team to have won back to back World Cups. Sweden are the USA nemesis who knocked them out in the Olympics quarterfinal three years  ago. You  might also remember Sweden from the the USA"s last group play game, which some claim Sweden sandbagged to get into the easier side of the bracket.

And so the game began, with Germany exerting their presence and dominating play. It looked like it was going to be a long day for Sweden. It only took until the 16th minute for Germany to go up 1-0 for a picture perfect pass to the feet of Lina Magull, who volleyed it in. This did not deter Sweden who continued to put increasing pressure on the German defense until only six minutes later, when a German misjudged header gave Sofia Jakobssen a clear shot that she neatly placed inside the far post.  Suddenly it was 1-1, and Germany had conceded their first goal of the tournament, and it was game on.

This was a new experience for Germany  -- being scored upon! Suddenly,  it seemed that Sweden forgot that Germany was the Women's World Cup powerhouse; they became relentless and looked repeatedly threatening, but the score remained 1-1 until halftime. After halftime, Sweden looked increasingly  like a team destined for the semi-finals, and it didn't take long: in the 48th minute, German keeper Almuth Schult scored a stunning save off of a Fridolino Rolofo header, but the ball dropped to the feet of Stina Blackstenius we slammed it into the goal.  2-1 Sweden!

Sweden continued to dominate most of the rest of the half and in the final few minutes held off a full court press and several dangerous German shots, but alas, Sweden emerged with is 2-1 victory a ticket to the semi-finals!

As the game wrapped up,  the fan zone came alive with a pyrotechnic display  including fireworks (in broad daylight ...), music, and a fire display. 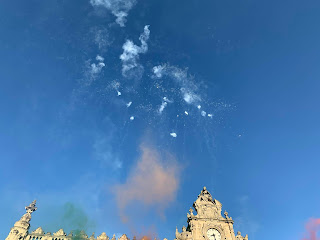 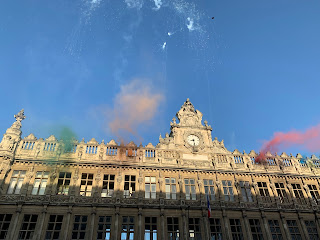 The Italian fans seem to not have let a loss get in the way of their good time, and since the stadium had been too brutal for the required selfie, we took it outside in the fan zone. 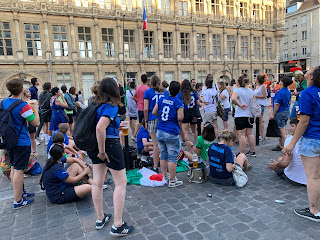 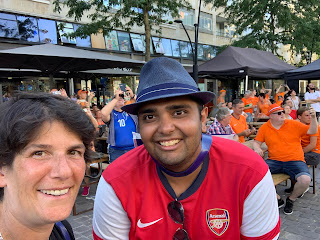