I had planned to do a boat trip up the Indian Arm this morning with Beth Martens (fellow chuck) and her family (Omar, Katie, and Cassie). I figured it would be a lovely and welcome distraction as we awaited the big game. It was a good plan -- I didn't start to get antsy until about the last 45 minutes of the trip. 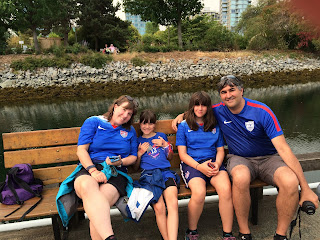 But enough preamble -- the environment was everything you could expect -- overrun with Americans, it was almost entirely a pro-American crowd. It was a joyous, festive, albeit nervous, atmosphere. And unlike any of the other games, we had a bit of a pregame show -- Canadian Maple Leaves, the FIFA banner, mounties, and flags saluting all the teams who played in the tournament. 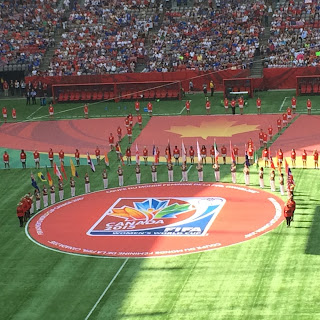 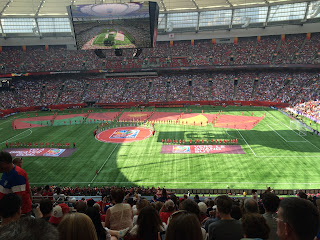 From the first moment, the USA made it clear -- they were out for redemption -- the heartbreaking PK loss four years ago was a bitter memory, and they were out to ensure there was no repeat this year. Japan started with the ball, passed it back, took a long kick, and the USA gained possession and immediately started pushing into the attacking third. And then, two and a half minutes in, Rapinoe sends a beautiful corner kick into the middle and Carli Lloyd runs in and just buries it in the back of the net! The stadium went completely wild!

And then, only two minutes later, it's Holiday taking a penalty from the same side. Julie Johnston flicks it on and again, Lloyd tips it in! USA 2-0 and we haven't even had five minutes of game time! The whole team ran over to hug their bench and the crowd cheered for a good solid minute.

Japan could not seem to muster the long sequence of passes that so characterizes their play -- they would make three or four good passes and then send a long ball to nowhere, kick it out of bounds, or otherwise lose possession. And when they did, the US attacked ... and attacked ... and attacked. In the 14th minute, Tobin Heath launched one into the box. The Japanese defender flicked it high in the air, but still in the box ... and this time, Lauren Holiday raced onto it and volleyed it into the back -- 3-0!!!!!

In the 18th minute, Lloyd almost made it 5-0 off a beautiful cross from Klingenberg. At this point, Japan finally settled down a bit; their possession improved and they began controlling the ball. And when Japan does that, they are dangerous and one makes mistakes at their own peril. Sure enough, a misstep by Julie Johnston in the 27th minute gave Ogimi just the opening she needed to send the ball soaring into the corner of the goal past Solo's outstretched hand. USA 4-1.

This is about the time it's important to remember that in 2011, Japan came from behind not once, but twice, to take the game into overtime and PKs. So, even with a 4-1 lead, it's natural to become a bit nervous.

Perhaps an even more salient reminder of 2011 was the 32nd minute Japan substitution, bringing Homare Sawa into the midfield. Sawa is arguably the soul of the Nadeshiko in the same way that Abby Wambach is for the USA. She's a tad slower than in 2011, but her ability to calm the team down, establish order, give Japan hope, and attack the goal is unmatched. And that's exactly what she did.

In the 39th minute, surprisingly, Japan made its second substitution. This is somewhat unheard of -- using two subs before half time -- but Sasaki (the Japanese coach) clearly needed some tactical changes to avoid being completely thrashed. And that's how they ended the first half: USA 4-1 and Japan having used two of their three subs.

And then it was the second half!

Rookie Morgan Brian, who has played wonderfully as the holding midfielder, had a beautiful shot in the 50th minute that forced the Japanese goalkeeper to make a tipping save. And then in the 52nd minute, the US scored again -- unfortunately, it was an own goal, by Julie Johnston. As mentioned earlier -- the Japanese take advantage of every misstep; a slight defensive glitch gave them a shot on goal that Johnston tried to divert with a header, but instead of diverting it, she sent it into the corner of our own goal, just out of Solo's reach. USA 4-2 -- and those who remember 2011 are started to get a bit twitchy.

And then, just a minute later, a Holiday corner kick goes to the far post, where Morgan Brian is perfectly positioned to set it up into the middle where Heath redirects it into the goal: USA 5-2!

Before the 60th minute, Japan used its last sub, replacing forward Ohno with Iwabuchi, who scored Japan's only goal against Australia. And only moments later, the USA made its first sub: Rapinoe is subbed out to a standing ovation, replaced by Kelley O'Hara.

It's a bit sad to say, but the remaining excitement of the match was the entrance of the team's two senior members: Wambach for Heath in the 79th minute and Rampone for Morgan in the 83rd minute.

And then it was all over ... the USA were world champions and Japan was in tears. There is a lot of genuine respect between the USA and Japanese teams, but it's always difficult to lose and have to stand around waiting to get those silver medals.

And then, there is the golden ball -- to the best player in the tournament -- Carli Lloyd!

And the golden glove for the best goalie -- Hope Solo.

Then the Japanese get their silver medals. 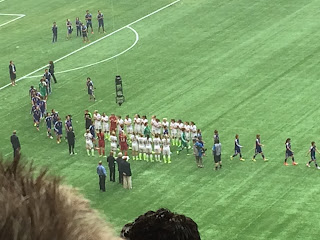 And finally, the new World Champions take possession of the trophy! 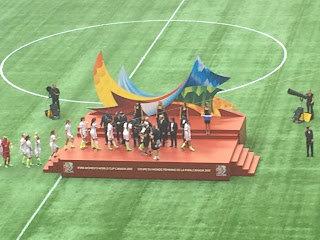