Third time's a charm: Back in Montreal

This is the big one -- the USA/Germany semi-final. Anticipating a large USA crowd, US Soccer arranged for two FanHQ events -- one the evening before the match and one the day of the match. I couldn't resist checking out the night before party (having spent most of the day enjoying the Montreal Jazz Festival -- I strongly recommend it). It reminded me a bit of a middle school mixer.

There were long lines outside and those of us who had RSVP'd got in quickly. I think the lines were partially to make one feel special -- the place still wasn't full when I left (8:15 from a party with a 7:00 PM start, but there were people still coming). The crowd was quite mixed: many families with kids, a few groups of teen age soccer players, lots of young adults -- most people came in groups. The locale was the bottom floor of the Telus Theatre, but it seemed more like a night club. There was a large dance floor with multiple bars, a raised area at the entrance with a bar and a few (very few) cocktail tables, and a stage where the DJ was set up.

For the first forty five minutes, nothing was actually happening, so people wandered in and tried to figure out what to do. The 14-year-old boy at the table next to me was wandering in circles around his family's table -- I could just tell that he had no idea what to do. But neither did anyone else. So, when in doubt, the adults bought booze. One rowdy teen age group from MA entered and tried to get the party started with some chanting of U - S - A, but it didn't really work.

It turns out that what we were missing was our cheerleader. And it turns out that DJs can double as cheerleaders. At least that's what DJ Spin Easy did. He was actually quite good. He worked on getting the crowd jazzed up and then played music and it basically turned into a dance party. Had I not been nursing a soon-to-be-replaced hip and had I been with a group of dancing friends, it would have been fun. Since I had neither, I headed home early.

And now the game!

Let me just say it was a match worthy of the top two teams in the world. Both teams played well and the outcome was really never quite certain, well perhaps around minute 84 it was, but a tremendous effort by both teams.

The stadium was packed -- the crowd practically all cheering for team USA. I felt a bit sorry for the few German fans. I haven't experienced such an atmosphere since the 2006 Men's World Cup game between USA and Italy in Germany. 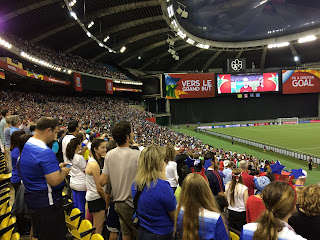 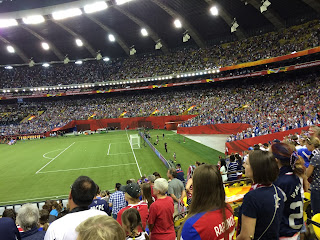 There was a lot of speculation about the lineup, and I think many might have been surprised by it -- Carli Lloyd moved up top pairing with Alex Morgan, leaving Holiday and Morgan Brian in the middle and Tobin Heath and Megan Rapinoe on the wings. Controversial or not -- it worked. Brian was superb -- she worked well with the defense and connected with the offense. It was definitely the best I've seen her play, and it made a tremendous difference to the entire team play.

The opening ten to fifteen minutes saw Germany putting enormous pressure on our back line pretty much at the 18-yard line. However, the defense was, once again, rock solid. Germany dominated in possession, but when the US got the ball and started moving it upfield, their attacks were more threatening. There were at least three solid efforts in those opening minutes, but none found the back of the net. Still, forcing the goalie to make a save within the first two minutes of the game was a good thing.

Megan Rapinoe was having enormous success stripping the ball from her player, and the other Megan (Klingenberg) was both an offensive and defensive force. Germany still dominated in possession, but the USA began to do a better job in the second quarter of the match moving the ball around and possessing. The teams went into halftime 0-0, and it looked like it could stay that way for a very long time.

There were no personnel changes at halftime and the game continued largely as before, albeit perhaps even more balanced. And then things got interesting. Julie Johnston fouled German midfielder Alexandra Popp ... in the box! Ouch -- penalty kick to Germany. The noise when Sasic, the top scorer in this World Cup, missed the PK was earth-shattering. In a bizarre twist of fate, only 9 minutes later, Alex Morgan got fouled in the box by German defender, Annike Krahn. Unlike Sasic, Lloyd placed the ball in the net cleanly -- USA 1-0! Interestingly, she placed it in exactly the same spot she did against Colombia, but Angerer dove the wrong way.

Up 1-0, thus began the longest 22 minutes of a sportsfan's life. Kelly O'Hara came in for Tobin Heath around the 75th minute, and Abby Wambach replaced Megan Rapinoe in the 80th (moving Lloyd back to midfield). While several of our opportunities were lost because no one was crashing the far post, O'Hara fixed that. The first time, she didn't quite get there in time, but in the 84th minute, Carli Lloyd sent one zipping across the goal just out of Angerer's reach and O'Hara was there to drill it into the back of the net. USA 2-0!!! The fans went wild.

Germany didn't give up, but the US held fast. In extra time, Sydney Leroux replaced Alex Morgan and the crowd just cheered and cheered waiting for the final whistle.

Once again, our defense was purely spectacular. Germany barely got into the box -- our back line simply would not let them through. In the second half, they tried taking shots from outside the box, but the defenders were sufficiently well positioned that the shots rarely posed a challenge for Solo.

Tremendous effort by team USA! We're off to Edmonton tomorrow for Japan/England, and then off to Vancouver!

And for those of you who were perplexed by the idea of a zamboni-like device for watering the turf, here is our halftime friend! 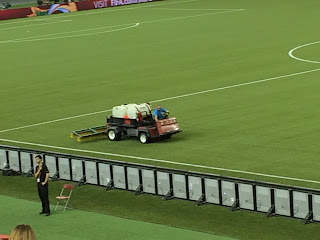